RADIOactivity-LABoratory is a project promoted by the National Institute of Nuclear Physics (INFN) to improve awareness on the importance of monitoring radon exposure in environments.

The project is aimed at secondary schools and provides interdisciplinary activities related to the monitoring of ionizing radiation of natural origin. From the introduction to nuclear phenomena to the health consequences due to exposure even at low doses of radiation, from the origin in the chains of natural radioactivity to its diffusion outside and inside, from the measurements in real time with active detectors to measures on medium-long times with passive detectors.

Why does exposure to radon influence us and how is it regulated? What precautions should be taken to effectively reduce exposure and risk? From the history of the discovery of radioactivity to radon day to sensitize citizens.

The RADIOLAB project is located in the third mission of the INFN National Institute of Nuclear Physics: dissemination.

It was created with the aim of providing the INFN with a tool to be used at an institutional level for scientific communication, in particular on environmental radioactivity issues.

The project refers to an effective action to spread scientific culture, and in particular nuclear physics, through the involvement of high school students in environmental radioactivity measures. Scientific communication, teaching, and scientific research are integrated by carrying out actions of training orientation through a process that traces the phases through which a research work evolves. The implementation method also leads to the dissemination of environmental radioactivity topics even outside the school environment.

The awareness of the presence of environmental radioactivity of natural origin ensures that students, their teachers, and their families become familiar with these issues and their participation also allows to conduct monitoring activities of indoor radon and radionuclides in the environment, both of natural origin that anthropic.

The RADIOLAB project will therefore create a real path that includes work sessions in the laboratory, with the assembly of the detection equipment, in schools (but also houses, buildings that appear particularly interesting for the purposes of radioactivity measurements), with the exposure of the dosimeters and again in the laboratory for the reading of the dosimeters and the processing of the acquired data. This will involve an active involvement also of the teachers who through this project will be able to follow a real updating path, above all in view of the new ministerial directives that foresee the teaching of modern physics in the last year of the high school. This will require a review of the educational programs with the need to integrate the curriculum of mathematics, physics, chemistry, biology and computer science with activities that lead to the key concepts of radioactivity through the interaction between radiation and matter (with particular attention to biological damage from ionizing radiation), the role of probability and statistics in the decay law, terrestrial radioactivity and the geological structure of the territory.

The strategy adopted in the RADIOLAB INFN project mainly favors

These certainly represent strengths that make us predict the success of this initiative.

An Interdisciplinary Project On Radon Exposure

Radon gas is by far the most important source of ionizing radiation among those that are of natural origin. The gas emanates from rocks and soils and tends to concentrate in enclosed spaces like houses.

The World Health Organization first drew attention to the health effects from residential radon exposures and promoted effective strategies for reducing the health impact of radon and to raise public and political awareness about the consequences of long term exposure to radon (WHO, 2009).

RADIOLAB born with the purpose to disseminate science in society through science education. It is a nationwide initiative and its focus is on a hands-on measurement of indoor radon contamination realized in secondary schools. Students start with a survey on radon in the school and surroundings, follow a learning path to introduce nuclear phenomena, are introduced to measures of radon concentration by using active and passive detectors, design a series of measures and implement them.

RADIOLAB has proven to be an excellent opportunity for the professional development of science and non-scientific teachers.

Physics, biology, geology, chemistry, mathematics, statistics, and the history of science are the main fields in which students acquire a greater and deeper awareness of the basic concepts necessary to act consciously in a complex real context. But above all the discovery that they can acquire knowledge through active practices and cooperating together getting to know and quantify even an elusive gas like radon.

Many opportunities for peer sharing are offered, initially at school, but also in public events such as the Night of European researchers and a RADIOLAB summer school where students and teachers can discuss their experiences and results.

In an increasingly interconnected and globalized world with common problems and challenges, skills from a range of disciplinary and professional perspectives have become crucial for the identification and management of new and emerging global concerns. Examples of global or complex problems that citizens face with collective or individual choices and that require interdisciplinary study include global warming, environmental pollution, apparently harmless practices that can damage health in a shorter or longer time (Davies & Devlin, 2010). Rarely, however, students have the opportunity to experience an interdisciplinary approach to a complex real problem (Spelt, Biemans, Tobi, Luning, & Mulder, 2009).

Since 2005 the National Institute of Nuclear Physics (Istituto Nazionale di Fisica Nucleare, INFN) proposes to high schools to carry out a monitoring of the indoor exposure to radon that allows exploring the interdisciplinary aspects of this theme also through laboratory activities: the RADIOLAB project.

RADIOLAB started with the aim of improving scientific communication, in particular on environmental radioactivity issues.

The project refers to an effective action to spread scientific culture, and in particular nuclear physics, through the involvement of high school students in environmental radioactivity measures. Scientific communication, teaching, and scientific research are integrated by carrying out actions of training orientation through a process that follows the steps through which a research work evolves. The implementation method also leads to the dissemination of environmental radioactivity topics even outside the school environment.

Radon is the second cause of lung cancer in the general population, after smoking. Epidemiological studies have provided convincing evidence of an association between indoor radon exposure and lung cancer, even at the relatively low radon levels usually found in buildings. However, efforts to reduce the number of lung cancers related to radon exposures have so far only been successful in very few countries.

The awareness of the presence of environmental radioactivity of natural origin ensures that students, their teachers, and their families become familiar with these issues and their participation also allows to conduct monitoring activities of indoor radon and radionuclides in the environment, both of natural origin that anthropic.

Apart from some initial seminars that introduce nuclear phenomena, all activities are based on increase students’ motivation (Pugh, Linnenbrink‐Garcia, Koskey, Stewart, & Manzey, 2010) and on active and cooperative learning (Keyser, 2000).

The strategy adopted in the RADIOLAB INFN project is focused on direct engagement of students in laboratory activities, the national level of the initiative, which allows a comparison between different contexts, and the interdisciplinary approach.

Although the project has been implemented for more than a decade, only recently has a systematic monitoring activity been introduced on the diffusion of knowledge of the problems related to radon exposure. a very short questionnaire is used by the students to find out the percentage of the population that knows the radon risk. The survey allows developing transversal skills of a relational type among peers. Students start interviewing other students of the school and their families to continue the events that are open to the public at school, such as exhibitions or orientation activities, followed by statistical analysis of the data.

Introduction to nuclear phenomena and the radon risk

The introduction to nuclear phenomena is carried out with seminars and historical research related to the figures of the Curie spouses. Recently, all the INFN offices that participate in the project organize the Radon day, on the occasion of Marie Curie's birthday (November 7th). In dealing with phenomenological aspects, particular attention is given to the effects of ionizing radiation on biological organisms.

Radon concentration can be measured by using active and passive detectors, and students design a series of measures and implement them. The most part of measurements is realized by means of passive detectors (CR-39) that remains for a minimum of 3 months in a diffusive chamber. In order to be able to see under the microscope, the traces formed by the particles emitted by the radon a chemical etching is therefore necessary.

Finally, a series of measurements are performed by using the images from the microscope. Data analysis and calibration allows estimating the radon concentration.

Other action to promote awareness

Every year, almost all section organizes a final event in which students share with other students their results, discuss different aspects in measurements and strategies in data acquisition and analysis, compare different concentrations and how they can be due to a different geological background or different construction techniques for buildings. Furthermore, a national RADIOLAB summer school was proposed the last year with excellent feedback both from students and their teachers. Radon Day and the European Researchers’ Night complete the event related to the project.

The first goal achieved was to assess the general public's lack of awareness of the risk of radon by using the survey. A very low number of respondents knew the problem of the radio. Only in the territories where the project has been realized for many years, higher awareness values were obtained but always well below 50%.

The measures in indoor radon monitoring showed very different values and students investigated what could be the causes of such different results by examining the geological information on the territory, the construction techniques and the building materials used, their state of conservation, etc.

The project activities have many interdisciplinary aspects ranging from health aspects to the risk due to exposure to ionizing radiation, from the history of the discovery of radioactive phenomena to the monitoring of natural radioactivity, from the diffusion of radon in the minerals from the subsoil up to touch technological aspects such as techniques of building construction and the materials used.

A step in the preparation of CR-39 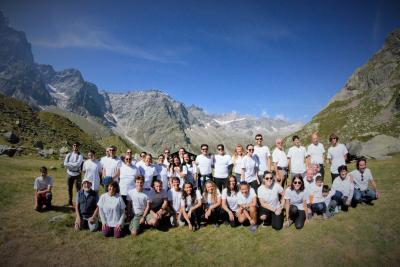